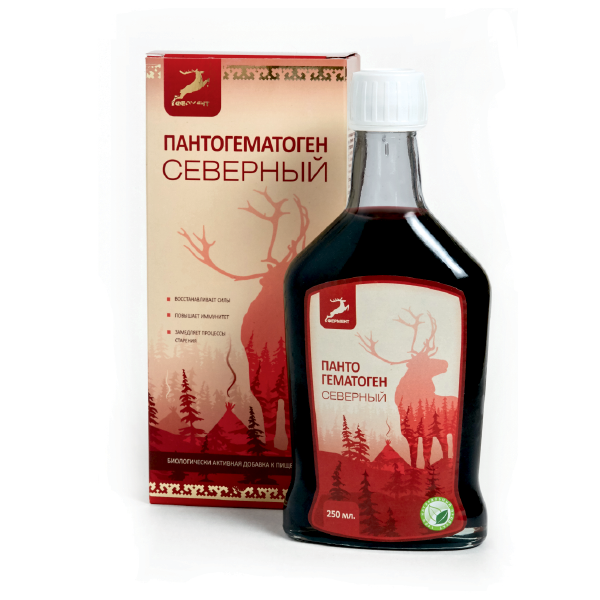 It is a universal adaptogenic medication with mild effect. It is a natural source of iron, natural free amino acids, digestible vitamins and minerals of animal origin.

Doze: daily dose (2 tablespoons) contains 10-12mg of iron, which corresponds to 71–86% of the iron from the recommended daily intake for adults.

Pharmaceutical form: liquid, in a glass bottle with capacity of 250 ml; in a sachets (15 ml).

Storage conditions: Store in a dry, dark place at a temperature from 0 to + 20 ° C. Gelation is acceptable, store in refrigerator after opening.

Organic preparations made of reindeer-breeding products.

From the ancient times the Raw materials of animal origin (primarily deer) have been used in Oriental medicine for preparing a number of medicines. In Oriental medicine, organic preparations later started to be used from the internals of cattle, sheeps and pigs, raised on a special cattle-breeding farms of Australia and New Zealand. Medicine made of healthy animal’s internals and tissue plays an major role in biochemistry for homologous internals and humans tissues. They effectively eliminate the imbalance and biologically active substance deficiency in homologous affected tissues, thus effecting on the physiological regeneration process. Due to this feature organic preparations had been applied as a high effective and reliable treatment for (severe internal pathology) treatment, rehabilitation of patients after surgical interventions, chemo- and radiotherapy, and body’s rejuvenation.

In Russia, only a reindeer meets the needs of the organ donor, used for producing medicines, which saturates the body with vital biologically active substances. It is related with the year-round keeping of the reindeer in the native pastures in the extreme North conditions, infectious safety and biological control, availability of killing points and departments which are standardized by the European Requirements.

The employees of «Ferment» Close Joint-stock Company had developed a line of products made of deer antlers and blood, these products are successfully used as a medicine, BAA, antler baths and as a raw mateials for the food and pharmaceutical industry.

The preparations made of reindeer-breeding products developed by «Ferment» Close Joint-stock Company:

Don’t Forget to Rate Us
If you enjoy our product, give us 5 stars. It helps so much!
Rate Us
Not Now